Seen on A Part Volume 2, Meeting with Pierre & Gilles

HOW SHOULD WE DESCRIBE YOUR WORK? CAN WE TALK ABOUT INSTALLATIONS?

Pierre Indeed, initially, there is an installation, the model poses in a setting. But the final work is a painting. Gilles We make images but the concept of painting is more appropriate to our works, which are unique. The photo is taken on the canvas, then it is painted. Basically, we work like classical painters with the setting and the model.

YOUR WORK COMBINES TWO ACTIVITIES WITH VERY DIFFERENT TIMINGS. ON THE ONE HAND, THE IMMEDIACY OF PHOTOGRAPHY AND ON THE OTHER HAND THE PROGRESSIVE DEVELOPMENT OF THE PAINTING. HOW IS YOUR LITTLE THEATRE ORGANISED?

Pierre I am the photographer and Gilles is the painter. This fits in well with our two characters… Gilles Pierre’s work is based on the moment whilst I like to prepare and take my time. When Pierre takes the photo, we reflect on it together, each one with their own role and I leave it up to his inspiration, one and the other brings their views to each step. I’m always listening and I am mindful… For us it is very important that the model is reflected in the image, it needs to also have a sense of belonging, as we try to enter its world. Pierre It is a kind of exchange given that it also enters ours.

YOUR MODELS OFTEN EMBODY CLASSIC AND MODERN ICONS. HOW DO THESE CHOICES OPERATE?

Pierre It is often the model that causes us envy. Gilles Let us take the example of Marie Antoinette. As part of a set up at the Gobelins gallery we chose at Mobilier National, a set of furniture that had belonged to her. In this reconstituted boudoir we decided to create a portrait of the Queen. Pierre To embody it, I immediately thought of Zahia. Gilles It is a Marie-Antoinette revisited but its features stick together. It is a revised incarnation in an “Angelique, Marquise des Anges” fashion with a mild hint of Bardot. We liked that mixture. Pierre We allow a lot of space for improvisation. Zahia dreamed of a rural Marie-Antoinette, things gradually progress and fit into place. Gilles We have some ideas and as we go about our research these are transformed. A setting can end up quite different from  what  we had originally thought of. We do everything ourselves, which gives us great freedom. Pierre There is also the work related to the lighting, which is very important, as it can change everything. 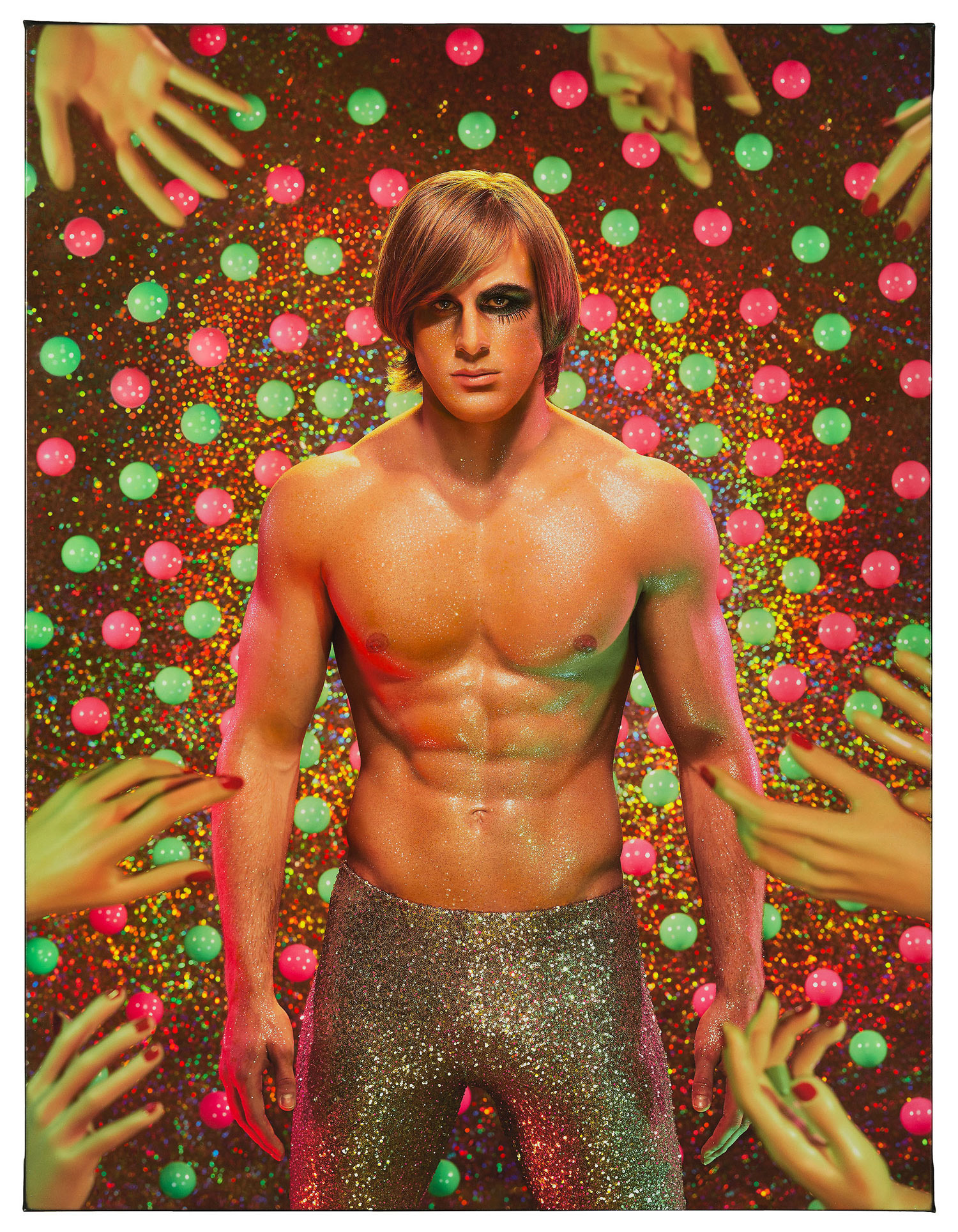 Gilles Our work is centred around the person, the lonely individual. They are the beings who invent a world that protects them. This melancholy that emerges, is the ultimate human condition. Pierre There is a subconscious element, and we love the mystery. Gilles Initially, our work was rather pop owing to influences from our then days as youths; we have evolved to staging. Pierre This evolution was dictated to us by life. Our studio has grown, the travels, the meetings and always our desire to discover. Gilles The emotions are barely suggested. For mourners, only the tears show the sadness, the face remains hieratic. Pierre No grimacing faces. Things are barely said, the mystery reigns.

YOUR WORK IS FUELLED BY MANY INFLUENCES, INCLUDING MYTHOLOGY AND RELIGION AND THEREFORE A CERTAIN MYSTICISM. IS THAT A CONSCIOUS THING?

Gilles We love to revisit the great mythological and religious themes: the Greek gods such as Oreste or religion with Adam and Eve or Saint Sebastien. We have had a religious education and culture, which has influenced us, however cinema has also fuelled us a lot, such as the circus or the fairground. In this slightly austere city of Le Havre, rebuilt following the war, I loved escaping to and dreaming. From the family home I watched the boats leaving in the distance…Pierre Child, in La Roche-sur-Yon, a sad little town, I cut out photos of stars and others from  the  magazines… I loved going into churches. The carnival, beautiful flower processions made me dream. Gilles With my parents it was museums and churches. But I’ve always loved popular culture: we get along well together. 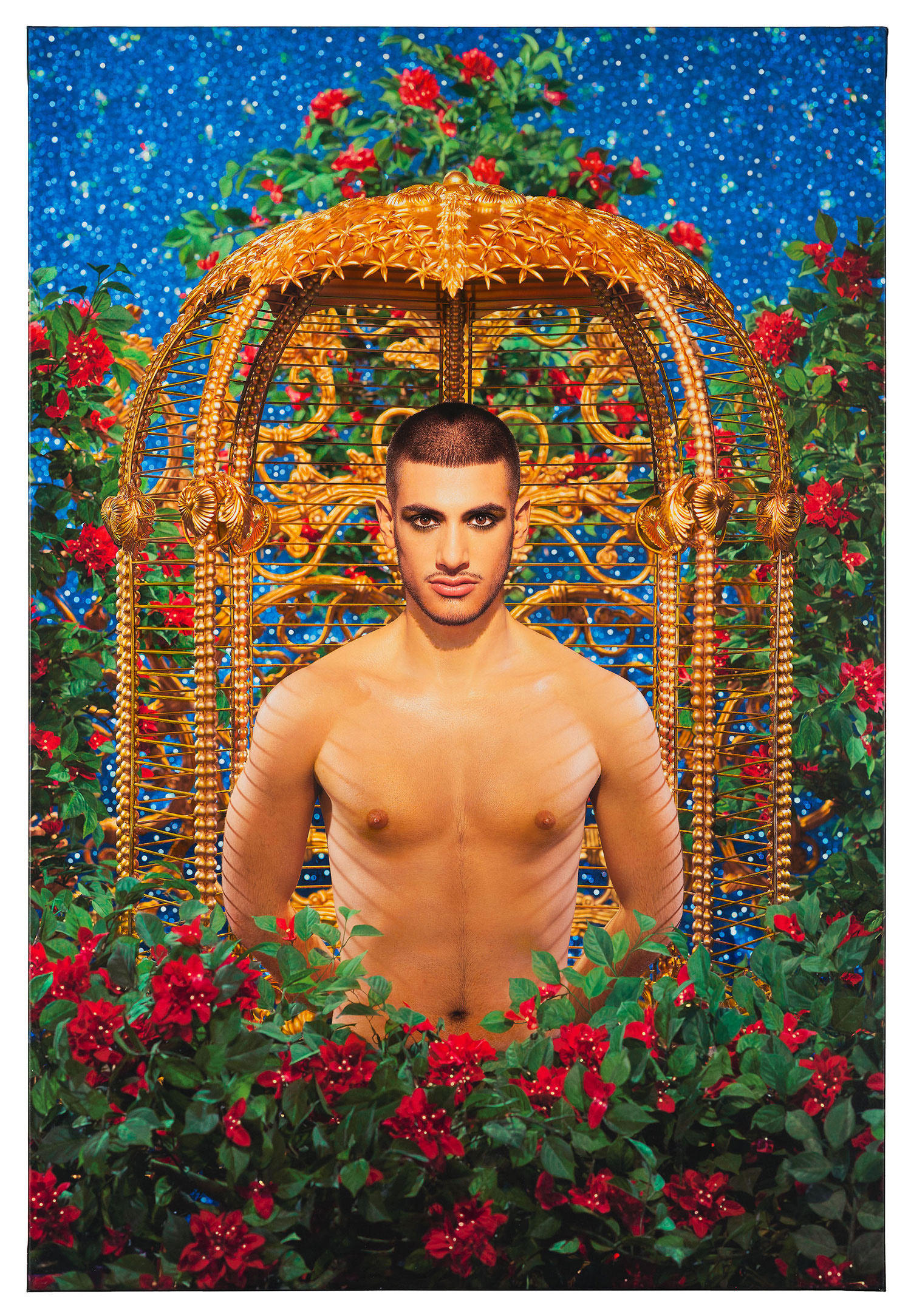 DOES YOUR WAY OF WORKING EVOLVE WITH TECHNOLOGICAL PROGRESS?

Pierre We have always worked using film but we have recently begun working with digital, but this has not really changed our work. Gilles Our first photos were taken in 24/36 format using a Nikon, and the lighting was very simple. The photo of Iggy Pop for  example was taken using flash. It gradually evolved as  the  setting arrived, at the beginning there were three pots of flowers and a curtain… Then everything became enriched… Pierre Now we work with several plans, such as the theater, cotton clouds are stuck on different layers of tulle in order to create the sky and provide depth. Over time we have perfected things and every day we seek new ideas and approaches. Just like our settings, our work format has become bigger and bigger.

YOU HAVE ALSO EXHIBITED PHOTO BOOTHS OF YOURSELVES. TELL US ABOUT THAT PROJECT.

Gilles I started to collect them at the age of fifteen. It tells the  story of my life; my meeting Pierre in 1976. And all our friends in the madness of the 80s until around 1988. Pierre These photo booths are like selfies. We did some almost on a daily basis. Gilles These are beautiful memories, 20 years of our lives. We  made a book, “Biographical photo booths”. It was very important for us, they inspired our first work back in 1976; they were “the grimacing” on brightly coloured backgrounds. Pierre The colour rendition from photo booths was very beautiful. We wanted to find a similar brightness, bright orange, red… That’s where we got the idea to paint on the photos. From that day on we have always worked together, photo, painting, we could not do any other way.

DO YOU TAKE A LOT OF PICTURES IN ORDER TO FIND THE BEST PHOTO?

Pierre Before, we took a dozen films… 10 views… Nowadays we’ve stopped counting, it depends on the sessions and in particular on the model… Gilles Some are right from the start, others are better the more one works on them… Pierre Sometimes a new idea comes during the shooting, we improvise, change and continue.

WHAT IS YOUR RELATIONSHIP TO BEAUTY? Pierre Beauty is the difference.

Gilles There are artists who seek a very precise ideal of beauty. For us it is very different, all backgrounds are represented, all styles, and it is in the variety that the unique aspect of each model inspires and touches us. Beauty is always different and that is what is wonderful. Pierre We go in search for their soul. The setting is there to express their inner feeling. It is one person looking at another that creates beauty. Gilles Beauty goes with emotion. This is what the person exudes, their charisma. It’s not because we are working with someone physically beautiful that we will make a beautiful picture. 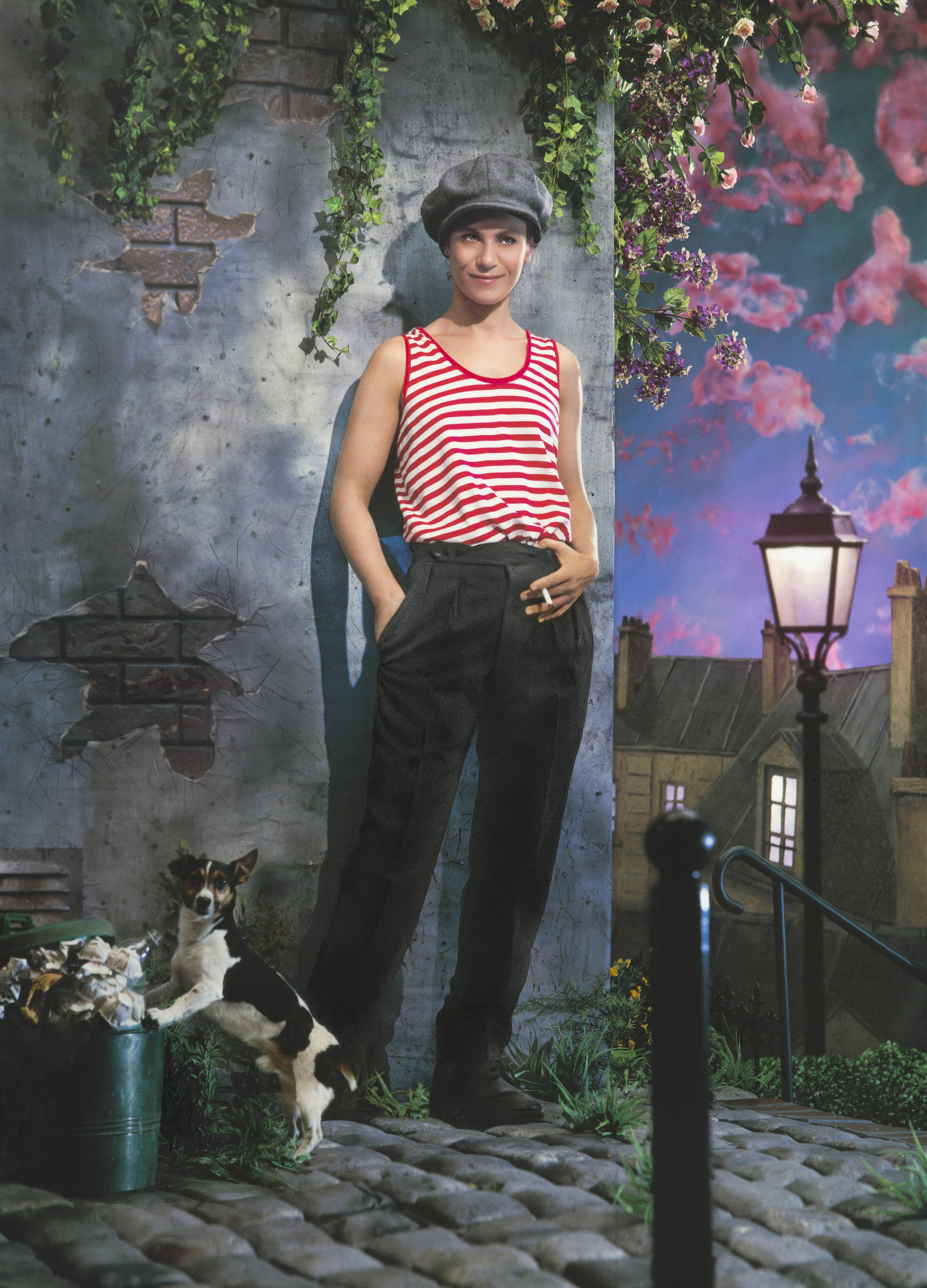 YOU MADE THE COVER OF THIS ISSUE WITH ROSSY DE PALMA. HOW WAS THIS WORK DEVELOPED?

Pierre We know Rossy well, we like her a lot. We had already photographed her in the 1990s. This time, she plays a black widow in tears. Gilles Things are built up gradually. First the black and then the tears. We wanted to address a more serious side, more dramatic to forget her whimsical side by working on the power of her face. Pierre Her face is so beautiful, so powerful, strong and amazing. Gilles We see Spain and great painting. It also reminds me of Russian cinema, its strong physiques and Baroque world. Pierre We never know exactly where we are going. That’s the beauty of creation, each session is an adventure. Gilles Basically, our work is like a big family album and it  reminds us of many memories.